There’s something about Josh that makes you instantly fall in love with him when you look at his picture – that great grin, the sparkling eyes, the warmth and yes, sensitivity, he projects. 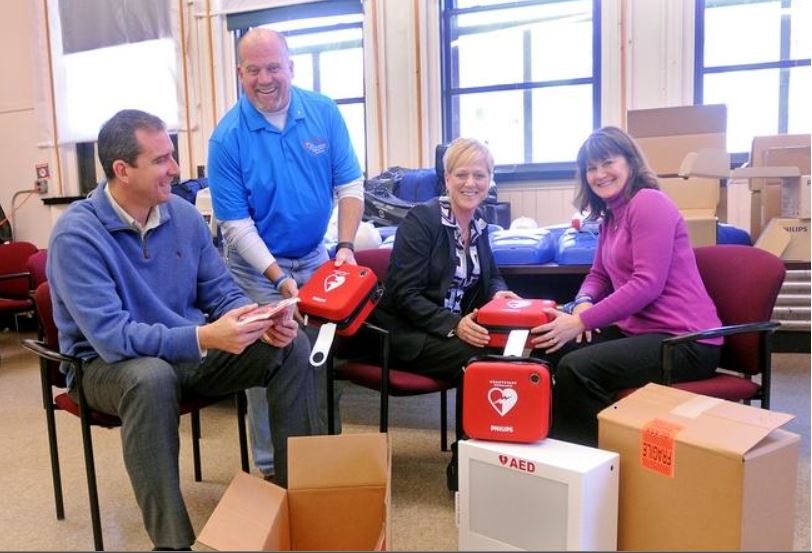 There’s something about Josh that makes you instantly fall in love with him when you look at his picture – that great grin, the sparkling eyes, the warmth and yes, sensitivity, he projects.

And just like his four siblings, 12-year-old Joshua Thibodeau, affectionately known as “Moose” by his family, was also the picture of health.

So, when Josh’s father Ralph Thibodeau dropped him and his brothers Jake and Adam off at soccer camp, there was nothing to alert the Holden couple that Monday, July 18, 2011, would become the worst day of their lives.

Wachusett Regional High School, where the Zalgiris Soccer Camp was being held, is not much more than a quarter of a mile away from the Thibodeau home so it took only a few minutes for Ralph to get back to the house. Deb, having dropped off daughter Annabelle at dance class, had also returned home with daughter Amelia in tow.

Sitting in the kitchen, talking about the kids, Deb and Ralph heard the house phone ring. It was Jake on the line telling them to hurry back to the camp, that Josh had had “a seizure.”

Deb and Ralph ran out the door, threw Amelia into her car seat and rushed to the soccer field, where they saw Josh lying on the ground with EMTs from the Holden Fire Department doing everything possible to save their son, who had gone into sudden cardiac arrest.

Taking the place of the heart’s pumping action, CPR would keep Josh’s blood circulating to his brain and other organs while administering a shock with an automated external defibrillator (AED) would hopefully stun Josh’s heart into a normal rhythm.

While Ralph stayed behind to round up all the other kids, Deb rode in the ambulance with Josh, sitting backward the whole way, praying for Josh, praying that the EMTs could help him. But, it wasn’t to be. Sometime after they arrived at the emergency department on the UMass Memorial Medical Center’s University campus, Josh was officially pronounced dead.

The kids at the soccer camp had been doing a light drill and they had already had two water breaks before Josh collapsed, his body seizing up, his mind lapsing into unconsciousness. A news account of the tragedy would say that Josh had no known medical condition.

That was true – no one knew that Josh’s heart was not normal.

Josh had hypertrophic cardiomyopathy, a disease in which the heart muscle becomes abnormally thick, causing problems in the heart’s electrical system.

About one in every 500 people has HCM. Many lead normal lives, with few if any symptoms. Others, in particular young people like Josh, experience an abnormal heart rhythm – triggered by physical activity – that causes the heart suddenly and unexpectedly to stop beating. If not treated within minutes, that sudden cardiac arrest leads to death.

Since HCM is commonly due to a genetic mutation, once the reason for Josh’s death was discovered, doctors at UMass Memorial contacted the Thibodeau family, insisting that everyone be screened.

All of the family members underwent an electrocardiogram, then the kids all had an echocardiogram. That’s the ultrasound test that picks up the echoes of high-pitched sound waves as they bounce off different parts of your heart. Then, the echoes are turned into a moving picture of your heart that can be seen on a video screen.

Everyone checked out just fine, except for Adam, who didn’t have HCM, but had another heart problem known as Long Q-T Syndrome. That’s a disturbance of the heart’s electrical system that prolongs the time the heart takes to electrically recharge after each heart beat. It too can lead to sudden cardiac arrest, as can a number of other underlying heart conditions that can’t usually be picked up by a stethoscope in a doctor’s office in a standard physical exam.

Sudden cardiac arrest kills 300,000 people every year, some of them children. But, no one knows how many children die from it, which is why the National Institutes of Health and the Centers for Disease Control and Prevention are setting up the Sudden Death in the Young Registry.

The registry will collect information on sudden cardiac arrest as well as unexpected death in epilepsy in youths up to age 24 in the U.S. That information could be useful in understanding how to best prevent these tragedies from happening.

But, Deb and Ralph have already figured out what they can do to prevent more young people in Massachusetts from dying from sudden cardiac arrest. Within a month of Josh’s death, they set up the Josh Thibodeau Helping Hearts Foundation. “We do this because we don’t want any parent to have to go through what we have,” said his mother.

So far, the foundation, in cooperation with physicians from UMass Memorial who volunteer their time, has screened more than 300 students. Youngsters, with their parents’ permission, fill out a health history form, then undergo an electrocardiogram. If there is anything that suggests an underlying cardiac problem, the kids then undergo an echocardiogram. Any sign of potential trouble and families are referred to a pediatric cardiologist or back to their own doctor.

About 10 percent of youngsters who have gone through the screening have been referred on for further medical follow-up, according to Deb. One child needed to undergo cardiac surgery, which was successful.

The foundation has donated six AEDs: three to families with children who have heart conditions; one to Burncoat High School in Worcester; one to the “Be Like Brit” project in Haiti and one to the Wachusett Regional High School’s physical education department.

Ten AEDs – each of them costing $1,000 – were donated last week to the Worcester Public School System, and sometime in February, the foundation hopes to set up another screening, with volunteers from Umass Memorial, in one of Worcester’s public high schools.

In addition, some 60 coaches in the Wachusett Regional School District have been trained in the use of CPR and AEDs, and the foundation hopes to facilitate and fund that type of training for coaches in the Worcester Public School system.

Deb and Ralph have also lobbied the Statehouse in Boston in order to bring attention to two Senate bills now sitting in committee. Senate Bill 1191 would mandate that all Massachusetts public schools be required to have an AED on site and available during all events. Senate Bill 1157 would require that high school coaches take a short, online course about sudden cardiac arrest.

Josh’s foundation is part of a national effort called the “Parent Heart Watch.” On its website, you will see pictures, including Josh’s, of children who have died as a result of sudden cardiac arrest. But, there’s also another group of photos of children like Adam who have been saved.

Adam, who was put on a beta blocker medication after his Long Q-T Syndrome was found, still plays soccer. However, there’s a time limit on his activity and when Adam’s on the soccer field, there’s an AED close by, one his family has purchased.

The Thibodeau family sees the foundation as Josh’s legacy, but it’s not enough to fill up their hearts. “We will never be the same,” said Josh’s mother. “We all go about our days with Josh-sized holes in our hearts. He is missed beyond words and understanding.”