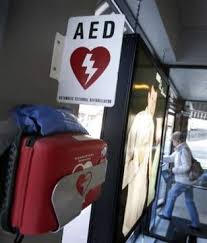 The number of Automatic External Defibrillators (AED’s) in Boston is growing and the survival rate for those who suffer sudden cardiac arrest in public places is now higher than 50 percent locally, according to local experts with the American Heart Association. However, FOX25 Investigates has found sometimes limited public access to AED’s.

FOX25 Investigates visited more than 20 popular locations around Boston, including shopping malls, museums, and other public buildings, looking for AED’s. While 90 percent of those locations reported having at least one AED on site, FOX25’s crew was able to easily find the devices at less than half of those locations.

Some of those locations told FOX25 their AED’s are stored in “security consoles,” while others declined to disclose where they keep the defibrillators and said the devices were controlled by their security team.

“They should be in all public locations, parking garages, hallways, airports, schools, so that you can't walk into that location without noticing it,” said Dr. Mark Estes of Tufts Medical Center and the American Heart Association.  “(An AED) doesn’t do any good in a closet in a security office.”

Estes is among the leading voices in New England who are pushing for more public access to defibrillation. Doctors say someone who experiences sudden cardiac arrest has less than a ten minute window to survive.

“For every minute that you delay definitive treatment with the defibrillator shock, survival goes down by ten percent,” said Estes.

While Massachusetts only requires AED’s in health clubs, Estes says more outreach and education, rather than legal requirements, can be used to expand public access to defibrillation programs.  “They (AED’s) are so intuitive that even people who have never been trained, non-medical people, no CPR training... the results are just as good with untrained, lay-people using these devices as they are with trained people,” said Estes.

“They say I died”  67 year-old Bob Froh of Weston had just finished a shift, volunteering at Faneuil Hall, when he suddenly collapsed in October 2015.  His heart stopped.

“I would’ve died,” said Froh. “In fact, (doctors) said I did die. It was the defibrillator that really shocked me back into life.”  Help came from several good Samaritans in the area, including Faneuil Hall Marketplace Public Safety Director, Karam Hamadeh.  “He had no pulse. He wasn’t breathing,” said Hamadeh. “To be honest, I thought he was already gone.”

Hamadeh asked a member of his team to grab the AED located on a wall inside Quincy Market. The device delivered a shock to Froh, who had regained a pulse even before first responders arrived. Froh later had bypass surgery and was recently able to return to Quincy Market where he collapsed.  “I continue to be extremely thankful and consider myself very lucky,” said Froh.